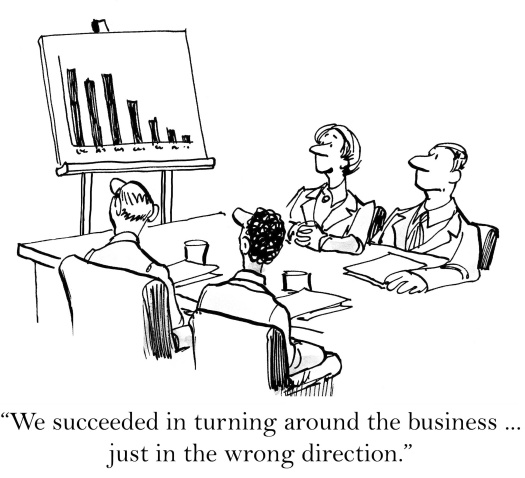 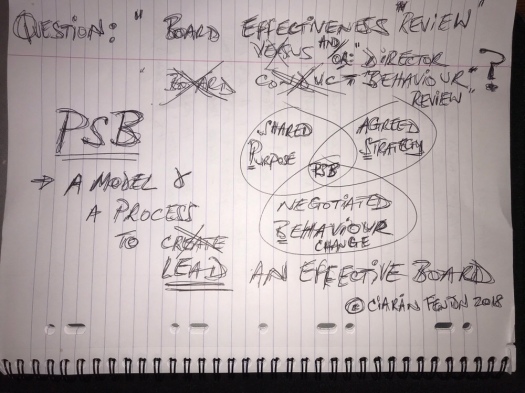 The picture above is a scan of some of my brainstorming doodles in the light of recent corporate traumas.

The behaviour issues arising in board effectiveness reviews are never published or rarely addressed fully. This is not the fault of the reviewers.

I don’t carry out formal reviews myself. I focus on addressing the behaviour issues which are surfaced by them.

It seems to me that effective boards are those where there is a shared purpose, an agreed strategy to achieve that purpose and negotiated behaviour change to implement the strategy. I call this PSB.

When I say negotiated behaviour change I mean each director’s commitment to colleagues to change, even a little, their worst behaviour that is likely to increase risks and smother opportunities.

It would be easy to kick this issue into the long grass, as done in the Financial Services sector, by falling back on yet another noun: conduct, which is observed behaviour over time.

Boards have an uncanny knack of appearing to confront tricky issues by turning them into grandiose nouns. All that happens is that there’s lots of faff and paperwork and conferences and no change. Witness The Banking Standards Board’s recent scathing reports into the lack of improvements in “conduct” since the Global Financial Crash.

I prefer adjectives: an effective board rather than board effectiveness. So what about ensuring we have effective directors to enable that outcome?

The main test for an effective director, in my view, is a willingness to change, even a little, their worst behaviour.

It would be unwise for anyone to indulge in schadenfreude on reading the Joint BEIS & Work and Pensions Committees Report into the collapse of Carillion published today because the behaviour that led to it is widespread and everyone knows it.

A more useful response would be to hold a workshop at your next board meeting with the title:

” What can we, as directors, learn from the mistakes highlighted in The Carillion Report?”.

I propose three lessons for your consideration:

First, voluntarily agree to use an ESG50 or similar approach to decision-making. I set out such a plan in a paper I presented at The University of Bolognia earlier this year, See #ESG50.

“It will never happen on our board”, I hear you say.  Don’t be so sure. The zeitgeist is not with you. For example, Harvard Business Review has, since 2015, given a 20% weighting to ESG issues in its Global Top 100 CEO rankings. It’s only a matter of time before this arbitrary percentage will be increased with a dramatic impact on the rankings.

And if the gladiators of capitalism such as HBR, Larry Fink and Merryn Somerville Webb are calling for behaviour change – which they are – then your board should wake up and smell the incense because there has been a shift in public opinion and tolerance for corporate misdemeanour.

The mandate society gives your board to trade is, merely that, a mandate. Don’t’ think it can’t be withdrawn.

But how does ESG50 work in practice? It means that every decision is subjected to an ESG test. If you read the Carillion Report you will I’m sure to agree that had its board applied such a test to its key decisions, which are listed in detail, Carillion would still be a going concern today.

Second, I propose that your board reviews the interdependence between the personal purpose of each director on your board and the purpose of the organisation.

In this regard one of the most chilling if unsurprising sections of the Report is on Page 47:

If through some magic time tunnel, the directors of Carillion could wind back the clock and put in place a process that would have prevented this hubristic outcome, what would they have done? What can your board do to avoid such consequences even if not perhaps as catastrophic, but hugely damaging to your business?

The answer must lie in the transparent articulation of personal objectives and how these are interdependent with the goals of the business. I acknowledge that these conversations would be painful and demand a level of emotional intelligence that you may feel some directors may lack. But what’s a bit of discomfort around the board table compared to these risk events?

Third, I propose that you appoint by rotation at each board meeting a Devil’s Advocate who has permission to call out anything which should be called out. I wrote about this at the time of the collapse: Could a Devil’s Advocate process prevent a Carillion situation on your board?

Even if you ignore these suggestions, you should at least bring your risk register up to date and place at the top of that list “Conduct Risk”. Had Carillion done so, and flagged as “Red” the possibility that their “cosy relationships” with advisers and NEDs would lead to disaster one hopes they might have mitigated those risks.

As a board exercise, why not print out the Report and work through the list of risk events that your board believes Carillion could have avoided and how your board could be exposed to similar risk? What have you got to lose?